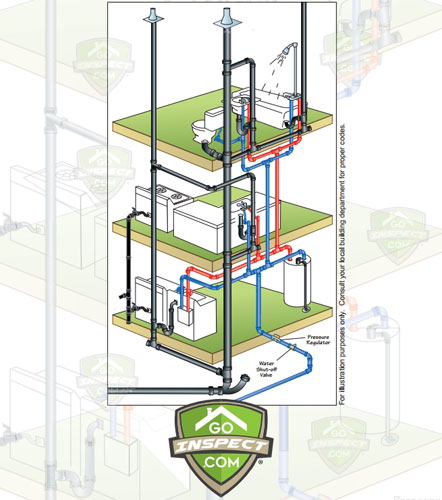 The plumbing system in your home is composed of two separate subsystems. One subsystem brings freshwater in, and the other takes wastewater out. The water that comes into your home is under pressure. It enters your home under enough pressure to allow it to travel upstairs, around corners, or wherever else it’s needed. As water comes into your home, it passes through a meter that registers the amount you use. The main water shutoff, or stop, valve is typically located close to the meter. In a plumbing emergency, it’s vital that you quickly close the main shutoff valve. Otherwise, when a pipe bursts, it can flood your house in no time. If the emergency is confined to a sink, tub, or toilet, however, you may not want to turn off your entire water supply. Therefore, most fixtures should have individual stop valves.

Water from the main supply is immediately ready for your cold water needs. The hot water supply, however, requires another step. One pipe carries water from the cold water system to your water heater. From the heater, a hot water line carries the heated water to all the fixtures, out-lets, and appliances that require hot water. A thermostat on the heater maintains the temperature you select by turning the device’s heating elements on and off as required. The normal temperature setting for a home water heater is between 140 degrees F and 160 degrees F, but 120 degrees F is usually adequate and is also more economical. Some automatic dishwashers require higher temperature water, though many of these have a water heater within them that boosts the temperature another 20 degrees F. 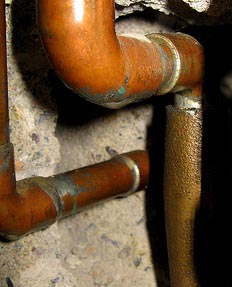 The most common type of water supply piping is copper piping. This piping is used both to supply the water from the street connection at the municipal connection to the dwelling as well as in the interior of the house for supplying fixtures. It is important that the copper piping not be kinked as this will reduce water flow. Residential service piping is typically 3/4 inch. Larger homes may have 1 inch or larger. The horizontal supply piping is generally 3/4 inch with 1/2-inch risers to fixtures. Smaller homes or homes with one bathroom may have 1/2-inch supply piping.

Copper is a very dependable material, however, if the water is supplied by a well and the water is acidic or has a low pH level, the acidic water degrades the copper. When the walls of the pipe wear thin, the failures will look like tiny, round, green patina stains. If these stains are ignored, water may spray through the hole in the center of the round stain. This problem is generally due to the acidic water, which should be neutralized.

Water hammer, otherwise known as the banging noises made when water flow is stopped abruptly, is not unusual when metal pipe, such as copper or steel is used. The momentum of the water flow stoppage makes the noise. One solution is to provide an air cushion or shock absorber that will soften the movement or momentum of the water. Some water supply systems have air tubes or diaphragm appliances installed in the piping system to prevent hammering. 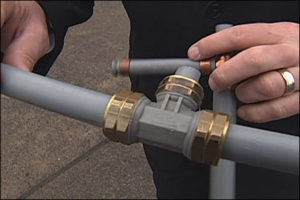 Polybutylene piping is gray plastic piping that is very flexible, with joints secured with either epoxy or inserts fittings and metal crimp rings. This material has been known to be defective at the junctions. Barbed brass or copper insert fittings with crimp ring joints are generally more dependable than the epoxy joints. The joints are vulnerable to chlorine in the water, which causes deterioration. The insert fittings have been in use since 1986 and are still in use today. Most municipalities do not allow certain types of Polybutylene piping to be used for residential potable water. There have been individual as well as class action lawsuits concerning certain manufacturers of this product. The major manufacturers of PB piping were Quest and Vangard. Since they can no longer purchase the resins necessary to produce this material, they have begun production of PEX. Which is a type of Polybutylene that is acceptable for potable water use in most areas. 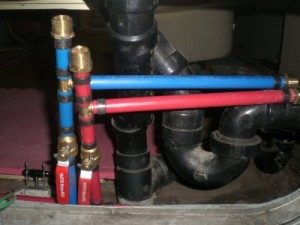 The second type of polybutylene piping is “Big Blue”. This piping is typically utilized in the main water supply to the house. Its name was derived from the color of the material. The material was an inch and half to 2 inches in diameter and was rated for cold-water installation only. The major problems that have occurred with this type of PB are related to poor installation practices. 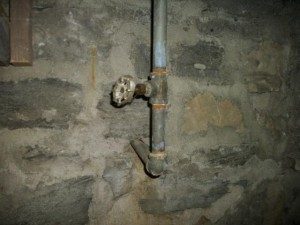 Galvanized steel piping is still in use, however, it is not installed in modern construction. It oxidizes from the inside out, the oxidation (rust) reduces the interior diameter of the pipe, restricting the flow of water and it usually first leaks at threaded joints where the pipes are joined. This is analogous to hardening of the arteries in humans. Adequate water supply can normally be restored, to some extent, by replacing the horizontal supply piping in the basement (assuming they are accessible) with copper piping. Replacing the vertical risers in the walls is much more difficult and expensive than accessible horizontal piping Replacing all of the older galvanized steel piping would be the most desirable solution but the most expensive. If the supply piping from the municipal water lines is galvanized steel, it is likely that the service piping is also galvanized steel. Galvanized steel piping fails sooner at the heavier used fixtures (i.e. the kitchen sink and the main bathroom). Failures are usually related to the amount of oxygen that is present. The more a fixture is used, the more water (and oxygen) is present, which corrodes/oxidizes the piping at a greater rate. First clues of failure in the piping are roundish rust growths, commonly called rust warts, on the outside of the pipe. These are failures that have come through the pipe. It is not unusual for the corrosion to seal the failure. 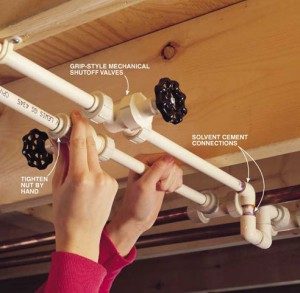 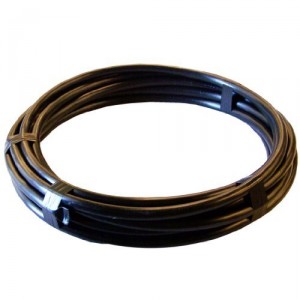 Polyethylene piping is typically used as service piping. Generally black in color, it is a flexible material that is easier to install than most other service pipings. Joints in PE piping may not be made with adhesives or solvent cements. Joints should have two stainless steel band clamps, but the connection to metal (such as copper) is typically made with one clamp. The fittings have a smaller interior diameter than the piping. Therefore, PE must be sized based upon the fittings. This material is approved for cold water installation only and is very often found on well water installations. 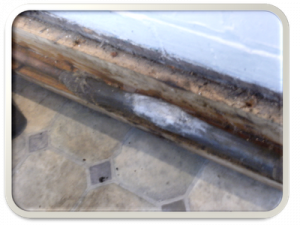 There is very little lead supply piping in use, however, you may see some lead service piping in 100 year-old inner city neighborhoods. The prominent concern is the probable 6-inch to 8-inch municipal main in the street that is also lead. Historically, only trace elements of lead are measurable in residential domestic water systems.

Threaded brass is uncommon, however, you may still see it in homes built before 1940. The same things that affect copper tend to impact brass. 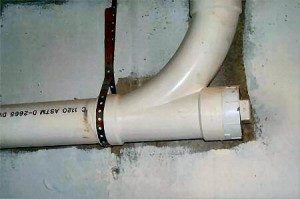 Easy to install and less expensive to buy. Should have a long dependable life. Caustic chemicals will dissolve or damage the plastic. 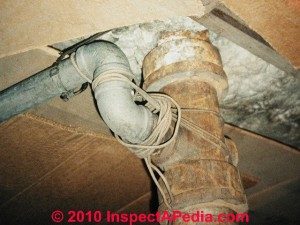 Below is a list of brochure pages with helpful inspection information in convenient .pdf format
Click Any Link Below To View Pdf Printouts